Troy Neihardt has created a distinct and energetic, fun-filled, thrilling, interactive musical sensation!  He uses his unparalleled musical talent and comedy to capture the best elements of the wildly popular dueling pianos entertainment concept. Troy Neihardt mixes his own premium blend of family-friendly entertainment, and adds his years of theatrical performance and production experience to create a one-of-a-kind entertainment thrill-ride, perfectly suited for corporate, concert, theatrical, and private events. 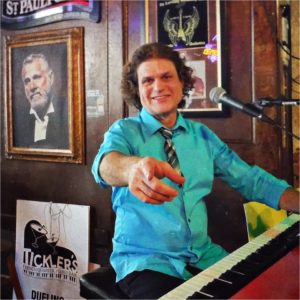 Troy brings an electric energy to any stage, anywhere.  He has been the headline entertainer in many parts of the world in places such as Amsterdam, Cancun, Norway, Paris, and Ireland.  Seasoned in the grit of New Orleans and the flash of Las Vegas, Troy’s love of entertaining remains in the city he calls home – Sweet Home Chicago!  He has opened for Ray Charles and played at such places including the Redhead Piano Bar, Howl at the Moon, Grand Central, Slugger’s Dueling Piano Bar, the Art Institute of Chicago and the Field Museum.  His musical diversity, personal charisma, and comedic exuberance are a must have at any event!